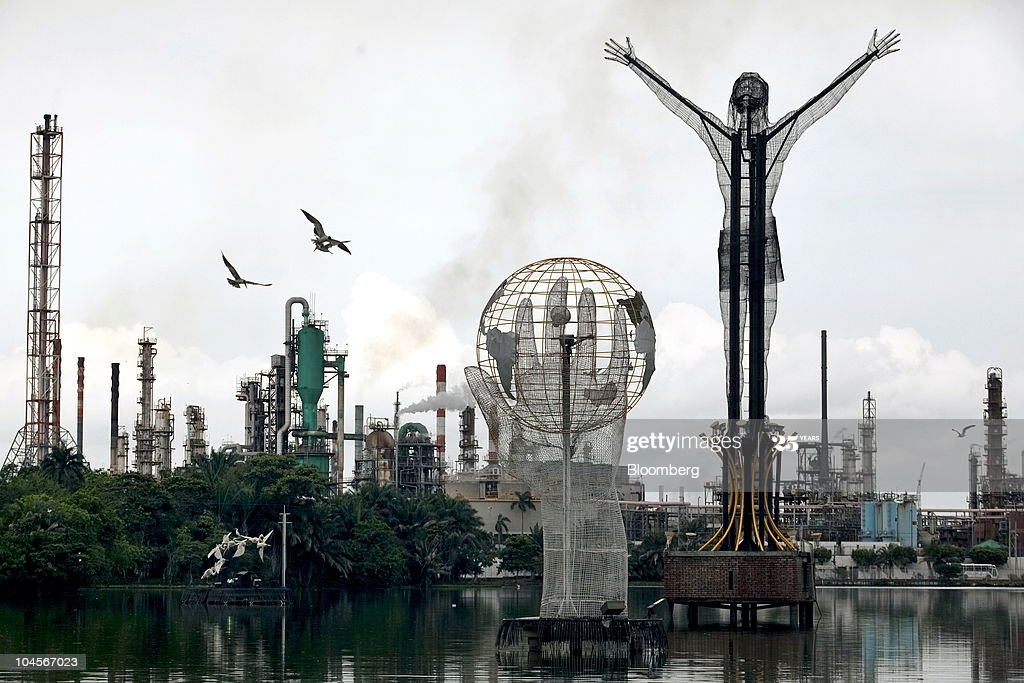 Barrancabermeja  is difficult to say even after practicing it a dozen times. The locals just call it Barranca – saving some breath.  It’s a hot climate, one of the hottest cities in Colombia.  Situated on the Magdelena river on the western border of  Santander just 115 km. west of Bucaramanga and 300 km. east of Medellin.

The city  is known as the oil capital of Colombia. It was once an important cattle town shipping steers from the inland farms down the river. Then in 1921 large oil fields were found around the city. The development of the oil industry brought in highways, railroads, 8 major oil  pipelines, a refinery and an international airport. Today it’s famous for its oil refinery supplying Colombia with 60% of all it’s gas and fuel needs.

A port on the Magdalena, the city feels like a port town – rough, unkempt, hot and sticky, humid with low rise buildings covered in dust. The city is dependent on its oil industry which is run by the state owned oil company Ecopetrol. Founded in 1951, the company’s origins go back to the 1910s. It is the principal oil producing, refining and transporting company in the country. Colombia once ranked third in the oil producing countries in Latin America behind Mexico and Venezuela (the later whose oil production has recently slipped to nothing). Barranca’s culture has been formed by migratory movements of people from all over Colombia who came to the city during the oil boom. A boom which has stalled leaving the oil industry in decline since 2015.

A decline blamed, in part, to the ELN (National Liberation Army) who waged war on the domestic energy industry infrastructure damaging oil pipelines carrying oil to Santa Marta and Bogota in 2002.  Another factor was the vast oil reserves in the oil fields around Barranca were being depleted. Meanwhile rich oil fields were being discovered in Colombia’s Amazon plains – Los Lllanos in the 1970s. Foreign investment in the Barranca’s oil industry declined to half of what it was in 2013 leaving the town economically distressed. But in 2020 it’s being reported investments in oil production have risen 23%

Everyone says the best thing to do in Barranca is go to the Muelle Barrancabermeja on the Magdelena River where there is a row of open air restaurants serving up fresh river caught fish – mojara, bagare, bocachica and cold beer. Only open for lunch, the restaurants straddle two streets: a busy avenue on one side and a wide street on the port side closed to traffic. At the end of the street there is a large fish market where the locals come to buy fresh fish.

Next to the restaurants and market is a dock where chalupas, small boats 20 feet long, regularly  run passengers and supplies down the river to Puerto Wilches to the north to Puerto Parra and Simacota to the south.

The Muelle is the most popular spot in the city in the afternoon. Businessmen, taxi drivers, workers and fishermen all frequent the restaurants to sit, eat or just sip a cold beer by the river watching the chalupas and people coming and going.

The Magdelena is Colombia’s principal river. It is 949 miles long (1,527 km.) and runs south to north  through the western part of the country between the  moutain ranges of the Cordilleras Oriental and Central; the river goes from Nieva to the Caribbean and takes its name from Mary Magdelena.

Unfortunately the river is reported to be polluted.  Pollution caused by oil extraction, industrial poisoning,  hydroelectric dams and 32 million people using the river to flush waste water.  Fish stocks are down by half over the last 30 years with over 19 fish species facing annihilation. The fisherman won’t eat the fish pulled from certain stretches of river.

While the river near Barranca is polluted they say the stretch between Giradot and Bogota is even worse. But if any river is worth saving in Colombia it is the Magdelena. The river has been slowly getting cleaner. Some say the war with the rebels actually helped save river and landscape by discouraging more oil prospectors and development.

Things to do in Barrancabermeja

*There’s an oil Museum  called the Museo Nacional del Petrolero 20 minutes in taxi from the center:

*There are wetlands nearby with a big statue called Cristo Petrolero.

*Probably the best restaurant in town – La Cazuela. It is in the city center with a focus on recipes using fresh river fish.

*And at night there are plenty of salsa and merengue clubs in the center.

To get there: it’s a six hour bus ride from Medellin, a 3 hour ride from Bucaramanga. Also the city has an airport accommodating domestic flights.

Barrancamermeja is one of those unique river port towns. Like the river towns of Mompox and Lorica, it possesses a special identity and energy . After visiting, it’s a town you won’t soon forget.

Valledupar – the Musical Capital of Vallenato