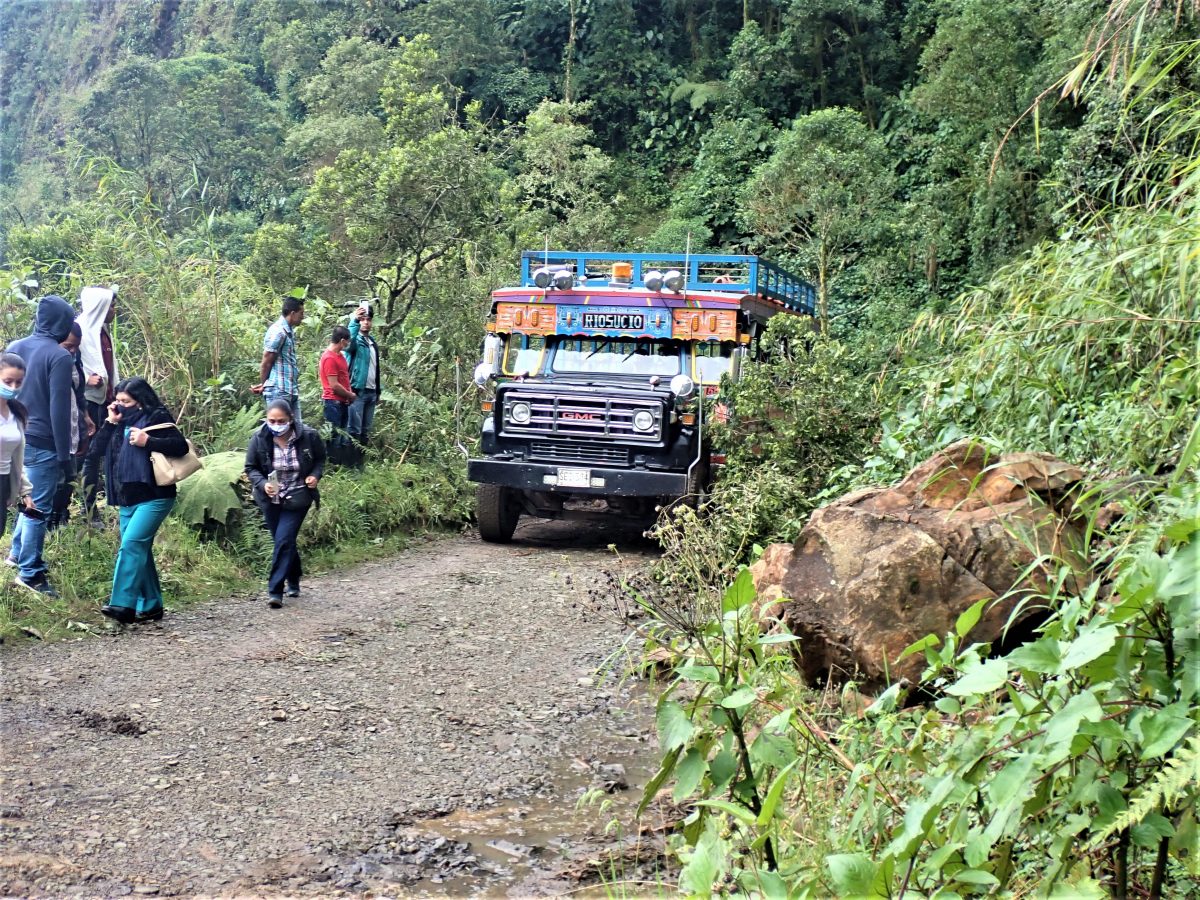 Chiva buses are those brightly colored open air buses you see parked outside of the markets in Colombia. These sturdy buses have been crawling over the mountainous roads of rural Colombia since the beginning of the 20th century, hauling farmers, animals,  sacks of coffee, plantains and  construction materials to and from towns and isolated rural outposts.

Chivas  have become a symbol and cultural trademark of Colombian culture. In 2008 they were declared a cultural patrimony.

Before Chivas the farmers relied on horses and carts to transport goods from the mountain farms to town. But in 1908 a Colombian engineer named Luciano Restrepo and a Colombian mechanic, Roberto Tisnes, imported a bus chassis from the USA and began work on what became the first Chiva bus.

In a shop in Medellin, they designed a wood and metal body to sit on a bus chassis. It was the first motor driven vehicle built in Medellin and was driven between downtown Medellin and the neighboring barrio of El Poblado.

The original bus had canvas roofs with four wooden benches inside.  Over time, the buses got larger and they added a hard top and a roof rack with a ladder on the back of the bus to allow more  room for cargo and people on top. They were also called  ‘bus escaleras’ or ladder buses.

The design of the buses has stayed the same over the years. They quickly became standard form or rural transportation lurching down the winding dirt roads of rural Colombia.

Today while the rich farmers have jeeps, Chivas still remain the principal form of transportation for many of the poorer Colombian farmers in the Andean departments of Antioquia, Cauca and Tolima.  The buses are still manufactured in Colombian by building or hacking bus bodies on sturdy Ford and Chevrolet truck chassis.

The word chiva means ‘goat’ in Spanish – named after the sure footed animal.

Today, the chiva buses look like something right out of a Disney cartoon. They are painted in bright colors – usually yellow, blue and red – the colors of the flag of Colombia, with colorful decorative patterns, murals and illustrative paintings.

The chiva body is made mostly of wood and metal with wooden benches. Each bench is accessible from the outside permitting passengers to easily slide in and out.  When the bus is full the roof is used for the overflow of people and everything else that doesn’t fit inside. Rolled up canvass tarps on the sides can be dropped down during inclement weather to keep the passengers and their cargo dry.

A trip in a Chiva bus is almost mandatory for someone visiting Colombia. The open air concept is great way to experience the Colombian countryside and the communal experience of sharing a bench with local passengers is a good conversations starter.

There are a number of scenic chiva routes throughout Colombia. In the coffee triangle the chiva is still the traditional mode of transportation and in heavy demand on market days.

The favorite chiva bus rides for tourists go from the  villages of: Jardin to Salento; Jerico to Jardin and Jardin to Rio Suscio.  Each route is around 4 hours long and costs 20,000 – 50,000 COP. But Chivas can be found in almost any mountain village in Colombia slowly loading up at the morning market and after lunch heading to the remote countryside. Catch a ride. Just make sure there will be transportation back to town before you jump on without your bags.

You can also experience the buses in any of the major cities where Chivas have become popular as recreational vehicles called ‘chiva rumberas’ or party buses.

These coaches have been converted into mobile night clubs rented out by tour companies to individuals and groups. Some of these buses are a work of art. A few wooden benches are removed from the center of the bus to permit the party goers to stand and dance to music being blared over speakers. Sometimes there’s a D.J. or even a live band aboard. Beer, aguardiente and rum are served as these party buses cruise around the city stopping at popular night spots. This urban tradition has transcended its Colombian roots and taken hold in cities as afar away as Miami and New York.

Modern transportation will never render the chiva obsolete. The most popular souvenir in Colombia is the small ceramic chiva bus sold in the airports and all over the country.

So take the chiva bus ride when you’re in the Andean mountains of Colombia. Or take a night tour of a Colombian city on a chiva rumbera. Or, at least buy a toy souvenir for your nephew on your way home.

Barrancabermeja – Colombia’s Oil Capital and Port on the Magdellena River

Valledupar – the Musical Capital of Vallenato